Eczema and psoriasis are common problems in the West with figures of diagnosed cases rising dramatically in recent years. It is an auto-immune condition which you may be born with or can develop at any time. It is often characterised by flakey and itchy skin which is both unsightly but also torturous for the sufferer.

According to the British Acupuncture Council...

Acupuncture may help to relieve symptoms in people with atopic eczema and psoriasis by:
(an extract taken from the British Acupuncture Council's research fact sheet)

Here's how one patient described their experiences of eczema... 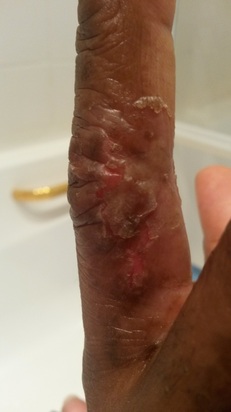 "I have suffered from atopic eczema since I was a baby and have experienced flare-ups of varying severity throughout my childhood and adult years.

At the end of 2013, I experienced an extreme flare-up on both hands, from fingers to wrists, which became infected and I found myself back on a cycle of steroid creams. In July 2014, I was prescribed a steroid treatment which I had an adverse reaction to - the skin peeled from my fingers and became badly infected. As a result, I had to take time off work and it affected my ability to care for my child. I had to wear cotton gloves on a daily basis to protect my hands and enable me to carry on with everyday tasks. It was very painful, traumatic experience, which affected my self-esteem and made me feel very low.

A friend recommended acupuncture and told me about a friend of hers, who could help me. I made an appointment to see an acupuncturist and completely by coincidence, the acupuncturist was Verity!

I felt safe and relaxed with Verity treating me from the start. She has a warm and caring nature which I find very comforting. As well as the acupuncture, Verity prescribed Chinese herbs to work alongside the treatments. The powdered herbs are easy to use and I have become accustomed to the taste and they have become a part of my daily routine. I now only see Verity once or twice a month for treatments as the eczema on my hands has calmed down, looks and feels significantly better.

Verity’s sessions look at you as a whole person and she takes account of all your circumstances when giving treatments, rather than focusing on one area and assesses your overall wellbeing."
These pictures were taken before acupuncture treatment commenced. As you can see, this patient's skin was literally peeling away leaving excruciatingly painful sores. I am pleased to say that the patient is now doing very well, with no further flare-ups and hands fitting for a Fairy advert!